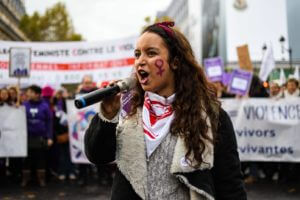 Alyssa is a 25-year-old French feminist from Moroccan and Algerian origins. She has a Masters in International Law with a specialization in human rights and fundamental liberties, and she is an international consultant on women and human rights. Alyssa is spokeswoman for the French organization of general interest Osez le Féminisme! (dare to be feminist). She is Project Officer for the European Network of Migrant Women, a co-convenor of Radical Girlsss (Young Women’s Movement for a global radical feminist perspective) and a member of the Women in Politics group of the European Women’s Lobby. Alyssa is also the founder of a theatre company which uses art and pedagogy to promote equality between women and men.

The video of Alyssa Ahrabare talking about her experience as a young activist is available here.