THE POWER OF YOUTH: Hannah Svoboda

THE POWER OF YOUTH series started on 12 August 2020, the International Youth Day, and continues to shed light on youth engagement and youth activism inside and outside the WAVE Network and the WAVE Step Up! Campaign. Hannah Svoboda, 21 years old, is the second generation WAVE Youth Ambassador from Austria and conducted an interview with Austrian activist Noomi Anyanwu. 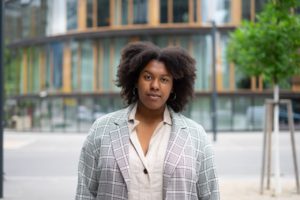 Noomi Anyanwu is a 20-year-old Austrian activist with a passion for feminism, anti-racism and youth participation. She has been politically active for the past five years and describes herself as an intersectional feminist. She is currently studying Romance Studies at the University of Vienna and is part of Black Movement Austria.

Hannah Svoboda: Noomi, thank you for taking the time to talk to me today!

Noomi Anyanwu: Thanks for inviting me, I’m looking forward to sharing my thoughts.

HS: Would you like to tell the readers a little about yourself and your activism?

NA: I started my activism on a scholar level. With the biggest left youth organisation in Austria, I was a candidate for the elections of school representatives in Vienna. Later, I engaged myself at the “Action of Critical Students” as referee for press and social media and later as their chairwoman. My motivation was always giving young, marginalised people a voice, that’s why I started my own school magazine. That also lead to me being the head of the biggest Austrian school magazine, a very enriching experience overall.

HS: Today we’re here on the occasion of International Youth Day. You already talked about being active in political groups for and by young people. What’s your experience with being a young activist and a young feminist in particular?

NA: Austria is still a very conservative country. We have many young, open, and inclusive organisations or movements, but the structures and the system which Austria is still based on, do not allow much change. Hence, it is so relevant for people like me to never stop fighting and demand the change we want to see. Especially, being a young feminist brings many obstacles and resistance within Austria’s society and politics. Because we are still fighting against sexist, right-wing and very conservative forces here.

HS: You’re a co-founder of Black Movement Austria. What are your thoughts on the intersections of anti-racist and feminist activism?

NA: For me, the key to real feminism is always an inclusive approach. I find that sadly this approach is often left out in feminist movements. In my opinion, it makes them non-feminist. Because we should all know it is only feminism when it includes all women! So, I engaged myself in getting to know the essence of feminism and also the lack of it. Racism is such a big historical part of Austria, and therefore of my life as a Viennese, Black woman. With my activism and also as Black Movement Austria, I always try to highlight the two-edges of my identity and thus my experience on sexism and racism – of me but also countless other marginalised groups.

HS: We’ve talked about your experience as a young woman in the political field. How do you ensure that the ideas and opinions of young people are taken into consideration in your organisation?

NA: We developed many projects to guarantee the inclusion of young people’s opinions, but the most important part is really having the youth engaged in that movement and that organisation. There are a lot of different teenagers and young adults from different ethnic and socio-economic backgrounds, who improve the movement with their ideas every day.

HS: You’ve worked as a press referee, published multiple magazines – how do you think our activism can benefit from social media in particular?

NA: Social Media is an immensely huge and important part of our daily lives. It often functions as a means of communication and information! Also, political activism has a way of showing itself through social media and therefore educating many. The most brilliant way to reach young people is by getting to know their way of receiving information. So, Instagram accounts, twitter threads or Tik Tok videos are the best known and the most effective way of making them politically aware and giving them a way to be politically active as well.

HS: The Step Up! Campaign aims to educate young people on gender-based violence. How are you trying to make a change in your community, how can other young people make a difference when it comes to sexism and violence against women?

NA: I believe education is the key to many problems – no different here. On the one side, we have to enforce preventative work for violence against women. Building safer spaces, investing in women’s shelters and educating women on their possibilities of seeking help and to protect themselves. On the other hand, the sensitisation of men and boys is a huge part of preventative work! This education has to be free, easily accessible and inclusive of all realities of course!

HS: If you were in a position to take three political measures in order to fight sexism and sexist violence in Austria, what would they be?

NA: Revolutionising Austria’s (sex) education, closing the gender pay gap and having a minimum of 50% women in all representational positions. Because shortly: Education is key, women are doing so much non-paid or underpaid mental or physical work and should be compensated for it (which could also guarantee women’s economic independence in general), and I believe that representation is the essence of empowering women and girls all over the world.

HS: Do you have any tips you’d like to share with other aspiring activists and young feminists?

NA: There are a lot of movements, organisations, collectives and so on that have a place for everyone. Organise yourselves and start being the change you want to see by joining those forces. Or start smaller: repost cool accounts or share your own thoughts on social media. Never forget: Political work is hard, draining, sometimes demotivational, but we are making baby steps here. And I can feel the world changing already.

HS: Thank you so much for sharing your views and experiences, Noomi! Do you have any closing remarks?

NA: Empower and support each other, fight for your beliefs and listen to those, who are often overheard in our world. Thanks for having me!