My name is Nikita and I am the WAVE Youth Ambassador from Estonia. In Estonia, I am working as a project manager in the University of Tartu as well as at the Tartu Women Support and Information Center. I have been involved in various international projects aimed to support women’s rights, gender equality and the fight against domestic violence. The latest project I coordinated was WHOSEFVA, in which WAVE actively participated as a partner. With financial support from the Rights, Equality and Citizenship Programme of the European Union, we organized many training courses and public events to improve service provision for elderly women victims of domestic abuse.

I noticed that it is easier to involve and inform people who are already familiar with our movement, and much harder to share information with people who know little about the ubiquity of gender-based violence.  I have been constantly wondering about how to best communicate and disseminate our efforts in order to reach everyone. How can we raise awareness about the issue to those who are frankly not aware? This June, I represented the WAVE StepUp! Campaign as WAVE Youth Ambassador during an amazing Femfest organized by the Crisis Center for women in St. Petersburg, Russia. Besides sharing our work, I also had the chance to hear about many interesting initiatives and projects. One of the most inspiring projects presented was the «Ne vinovata» festival, which I believe to be a great example of how to approach my concern. To better recognize the impact of this festival, it is important to understand the realities, in which it was conducted.

Violence against women in Russia is a troubling issue. Recent research (a.) shows that about 14,000 Russian women die annually from domestic violence-related injuries. This equates to about 38 women being killed every day, almost two women every single hour, and one every 40 minutes. Domestic violence affects one in four Russian families. While alcoholism and socio-economic problems often become a reason of violence, Russia’s political system condones such violence. In 2017, for instance, legislative change decriminalized some instances of domestic violence, in cases where it does not cause “substantial bodily harm” (a.) (such as broken bones or a concussion). Church and culture play a significant role in this as well. During feminist events, you can often see Cossacks or orthodox activists protesting against these events. Even I saw them patrolling in front of the entrance of this particular Femfest that I was a part of.  I was lucky enough to speak to some activists who told me stories about how anti-feminist activists broke into several events or intended on sabotaging them by cutting off the electricity.  You may ask yourself “Why?”. Well, they perceive feminism to be a threat to the patriarchal cultural establishment. Nonetheless, I learned during the Femfest that young feminist activists do not let themselves get discouraged. Fortunately, several activists managed to organize an incredible massive action in support of female victims of domestic violence called «Ne vinovata» festival. 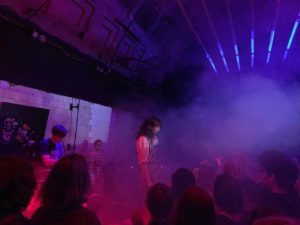 What happened? A massive punk-music festival in 22 cities in Russia and Belarus was organized and aimed at raising public awareness on domestic violence against women and collecting funds to support women’s shelters. 2477 people took part in the festival and 86 music bands performed. Organizers managed to collect half a million rubles, which went directly to support female survivors of domestic violence. The name of the festival “Ne Vinovata” literally means “Not the one to blame”, which refers to the problem of understanding and talking about violence perpetrated against women. Nowadays, a female victim of domestic violence is often jeopardized and victimized twice. Firstly, by the action of the abuser and secondly by the reaction of the general public, who potentially and wrongfully blame the victim, saying that she dressed or behaved an “explicit way”. During the festival, organizers actively promoted women’s rights for safety and self-expression. They gave a clear signal to society by reiterating that there is no excuse for violence and that women should not live in fear. 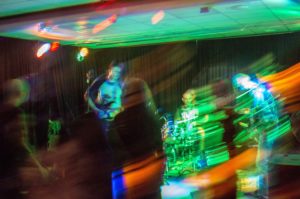 Punk culture was always a movement against the system.  When the socio-cultural system becomes a mean of submission and promotion of inequality, punk-festivals, in my opinion, serve as an excellent tool to address these existential problems. Moreover, the “Ne vinovata” festival brought together people with different musical and political “tastes”. In an informal and interesting atmosphere, many people, even those who are far from feminism, had a chance to recognize and understand the problem of domestic violence.

I believe that not only feminists have to stand up for women’s rights and fight against domestic violence, as this is a problem in numerous households in Russia, Europe and other regions. Before blaming the female victim of violence, a person should understand that it could happen to anyone i.e. his/her mother, sister or daughter. I think we need to organize more cultural events en masse like the festival described above, where every single person can familiarize him/herself with the necessity of fighting against gender-based violence and promoting gender equality.  I do not know, if this festival will be conducted next year or other European countries will participate; however, I strongly hope that more regions jump on board and aim to implement such inspiring initiatives to incentivise more people to become multipliers in promoting a life free of violence.

Let’s raise our voice and StepUp for everyone!