Ending FGM in Europe: Why is it #OurIssueToo?

„FGM is not a cultural traditional practice, but actually it is child abuse. […] Fundamentally, FGM is there to control women and girls’ bodies, and especially their sexuality.” – Leyla Hussein

At 7 years old, Leyla Hussein, who is now an anti FGM campaigner, activist, writer and licensed psychotherapist, had to undergo female genital mutilation in Somalia. “Before I knew it, I was screaming, and I could feel my flesh being cut off”, she says while sharing her survivor’s story of what she considers was one of the worst forms of abuse she has ever experienced.

According to the World Health Organization, Female Genital Mutilation (FGM) has been performed worldwide on “more than 200 million girls and women alive today” and is “mostly carried out on girls between infancy and age 15” . Nonetheless, the repercussions of this procedure last a lifetime. It comprises non-medical procedures that involve the alteration and injury to or the (partial) removal of the female genital organs. FGM has zero health benefits, yet severely harms psychologically as well as physically the women and girls affected.

Some of the many consequences of FGM can be:

FGM is not only a horrendous act of violence against women and girls, but it is also child abuse, as it violates children’s rights as defined in the Convention on the Rights of the Child.

Article 19.1.
States Parties shall take all appropriate legislative, administrative, social and educational measures to protect the child from all forms of physical or mental violence, injury or abuse, neglect or negligent treatment, maltreatment or exploitation, including sexual abuse, while in the care of parent(s), legal guardian(s) or any other person who has the care of the child.

Article 37
States Parties shall ensure that:
(a) No child shall be subjected to torture or other cruel, inhuman or degrading treatment or punishment. Neither capital punishment nor life imprisonment without possibility of release shall be imposed for offences committed by persons below eighteen years of age;

Additionally, it is also a form of sexual assault. Leyla Hussein explains: “When we look at FGM, what we need to focus on is this idea that we can just go and examine children’s genitals.” Unfortunately, children are subjected to being unsolicitedly as well as unwantedly touched and hurt by traditional practitioners. Leyla Hussein remembers that when their neighbour’s daughter, who was only one or two years older than her, explained just moments before she had to undergo FGM what is about to happen, Leyla felt like she had been given conflicted messages by her family, as “mommy told me that no one should [ever] touch me.”

Despite the practice being mostly carried out by traditional circumcisers , the 2016 UNICEF data collection on FGM highlights that “while in nearly all countries FGM is usually performed by traditional practitioners, more than half of girls in Indonesia underwent the procedure by a trained medical professional” . Furthermore, the UNFPA states that “about 1 in 5 girls who have been subjected to FGM had the procedure performed by a trained medical professional, and in some countries, this number is as high as 3 in 4 girls.” The erroneous belief prevails in some communities that “FGM is safer when medicalized” . Nonetheless, the UNFPA reiterates that “FGM can never be “safe” and there is no medical justification for the practice”. Moreover, trained health professionals who perform female genital mutilation are “violating girls’ and women’s right to life, right to physical integrity and right to health as well as violating the fundamental medical mandate to do no harm” . Therefore, health professionals worldwide are strongly urged not to perform FGM. Health care providers must know how to effectively respond to and treat health consequences of FGM as well as be trained in what to do when asked to perform female genital mutilation. The resolution WHA61.16 on the elimination of FGM (World Health Assembly) specifically urges all Member States

Furthermore, the Istanbul Convention also states in Article 38 that

parties shall take the necessary legislative or other measures to ensure that the following intentional conducts are criminalised:

a. excising, infibulating or performing any other mutilation to the whole or any
part of a woman’s labia majora, labia minora or clitoris;

b. coercing or procuring a woman to undergo any of the acts listed in point a;

c. inciting, coercing or procuring a girl to undergo any of the acts listed in point a.

The provision of accurate and clear information about this practice to women and girls who had to undergo FGM is undoubtedly necessary. The WHO stresses that the health care sector must be strengthened for effective responses to fight FGM. Moreover, health professionals must be trained accordingly to provide “medical care and counselling to girls and women living with FGM”. It is also essential to raise awareness about the consequences of FGM through consistent, responsible and transparent advocacy work. It is thus imperative to “develop publications and advocacy tools for international, regional and local efforts to end FGM”. In fact, the UNFPA aims to “mobilize health workers and midwives to serve as advocates for prevention and protection in their respective communities” .

End FGM in Europe? Yes, because FGM is #OurIssueToo

“More than 3 million girls are estimated to be at risk for FGM annually” around the world. Despite FGM being most prevalent in Africa, the Middle East and Asia, along with “some forms of FGM having been reported in South America” , FGM is a global concern. In 2012, the United Nations General Assembly unanimously adopted the resolution [A/RES/67/146] to ban and intensify global efforts for the elimination of female genital mutilations. In response to the resolution, John Hendra, UN Women Assistant-Secretary General and Deputy Executive Director from 2011-2014, said that [t]his [resolution] was a very important step to bringing about cultural and attitudinal change. Just as important though, is working on the ground with governments, communities and other partners to end FGM. In further efforts to globally combat the practice, the elimination of FGM is also included in the Sustainable Development Goals [Goal 5. Achieve gender equality and empower all women and girls] and has witnessed important progress in 2017. “Around 2017, one in three girls aged 15 to 19 had been subjected to female genital mutilation in the 30 countries where the practice is concentrated, compared to nearly one in two around 2000.” Nonetheless, FGM is still prevalent and it is prevalent all over the world.

The WHO states that “growing migration has increased the number of girls and women living outside their country of origin who have undergone female genital mutilation or who may be at risk of being subjected to the practice in Europe, Australia and North America”. It is therefore important to recognize that FGM is #OurIssueToo and it is thus the universal duty of all global actors to respond accordingly.

In fact, the End FGM European Network (End FGM EU) launched the campaign “FGM is #MyIssueToo” in 2018 to “call on the public to participate and contribute to its mobilisation”. WAVE also joined to support End FGM EU who stated that unfortunately “FGM is neglected by the majority of the population and considered as a marginal issue that only interests a small populous.” Nonetheless, WAVE also strongly believes that: “We must take initiatives and actions to end this horrible act of violence against women and girls.”

This year, the End FGM EU 2019 Annual Campaign is called “ #MyVoiceMatters  – Community Voices to end FGM” and is aimed at raising community voices, which will be done through various events, sessions, trainings, actions and more. Among many other efforts, the campaign intends to “mobilise and mainstream Community Voices into all sectors and areas concerning FGM to emphasise the urgent need for community engagement” and “call on all relevant actors, including civil society organisations, institutions and individuals, to systematically engage with communities to end FGM”. Additionally, the Network prepared a user-friendly Campaign Toolkit which can be accessed by anyone who wants to get involved and support the campaign. 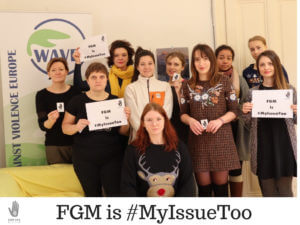 The End FGM European Network is an European “umbrella network of 22 European organisations based in 11 EU countries operating to sustain European action to ending female genital mutilation”. The Network highlights the importance of “building bridges and cooperation’s with all relevant actors in the field of FGM [b]y connecting grassroot communities with non-government organisations [t]o influence European governments and policy makers to work towards the elimination of FGM.” End FGM EU is dedicated to advocacy work as well as influencing policies and practices to “ensure a European, coordinated and human rights based & child-focused approach to end FGM”.

It is evident that only with joined forces and efforts from institutions and organisations from all over the world, including Europe, FGM can be effectively tackled. By giving communities a platform to raise their voices against FGM and educate not only their communities but also stakeholders and governments on the inhuman practice that is FGM; by organisations working together to advocate for a children’s life free of torture and subsequently influencing the enactment of effective policies that ensure a life free of violence; only then can we globally combat FGM.

“I believe FGM will end, but the only way that’s going to end is we need to end all forms of oppression against human beings.” – Leyla Hussein

Photo by Charles on Unsplash

Child, early and forced marriage as a worldwide practice