2019 marked the 25th anniversary of the International Conference on Population and Development (ICPD) in Cairo, where 179 governments agreed and adopted a Programme of Action which intended to empower women and prevent violent practices against them. In 2019, that goal still wasn’t completely met, and the heads of states and governments decided to reconvene to reaffirm their commitment to achieving gender equality and zero violence against women by 2030, along with the help of many other politicians, civil society representatives, community leaders, young people, academics, and others. In November, they held the Nairobi Summit on ICPD25, and I joined hundreds of other young people in attending and representing our generations. 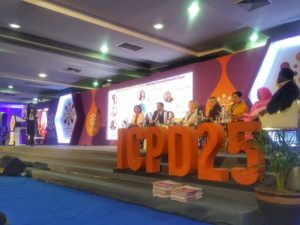 Participating in the summit with over 10,000 attendees, most of whom have years of experience and are on average three times as old as I am, was intimidating to say the least. To make it easier to engage, the organizers left a part of the program to be organized by and for the youth, and made hearing the young voices one of the objectives of the summit.

However, after talking about our exchanges and conversations with the “adults” after the summit, I noticed that most of the youth representatives had a similar experience. We felt lucky to have been in Nairobi, we had great conversations with other young people from around the world, we even talked to a few experts or academics or parliamentarians who wanted to hear our point of view, but at the end of the day, none of us felt like we made a difference, and none of us felt like hearing what we have to say was ever one of the priorities for most of other attendees.

I heard “Oh, you’re so young! How great it is that you’re here!”

I heard “Let’s take a picture, let’s show how the youth is engaged!”

I even heard “We need to see more young people like you at these events.”

But what never followed was “So, what are your thoughts?”

What never followed was “What do you have to say about this?”

And what never once followed was “We need to hear more young people like you at these events.”

I spent a day after the summit exploring Nairobi. I met Mary, who drove me around the city to show me all the parts of it she thought were interesting to visit. Mary is young, with a degree in marketing, and she works as a restaurant promoter while she’s trying to start her own business as a tour guide. She said she’s been trying to get it started for months, she’s been saving money she’s earning from promoting and invested it in a new car, but she was still having a hard time starting a female-led business.

I also met Paul. Paul works as a tour guide in the Karen Blixen Museum. Paul and I bonded because we were both graduating that month—he with a degree in tourism. He, along with a few other college students, is responsible for sharing Karen Blixen’s story with the visitors and keeping the memory of her alive. After graduation, Paul has bigger plans but doesn’t know what the next step is yet. It’s hard for the young and educated to get a job in Kenya, he said. 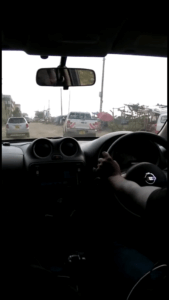 On my way to the airport, I had a conversation with Isaac, my Uber driver. Isaac is 27 and he already earned a Master’s degree in accounting. He’s been looking for jobs for months, but unsuccessfully so. He wants to start a family, but he doesn’t think he’d be able to support one with the money he’s making driving. He is now looking to leave Kenya, and to my question about where he’d like to live, he responded “anywhere but here.” As we were getting close to the airport, Isaac warned me to hold onto something because we were approaching an unpaved, gravel road. Isaac told me to take a picture of it, because it represented the number one reason for all of his problems. It represented corruption.

Isaac believed that if his government cared more about the wellbeing of the youth than their own interests, he’d be able to get a job. Isaac believed that if they cared more about the future of the country than their future earnings, he’d be able to plan a future of his own. I sat in silence, angry and ashamed. I was angry because I knew what Isaac was talking about—the same problems he was describing I was seeing every day in my country as well. I was ashamed because just a few days ago, I stood up together with thousands of politicians, advocates, academics, and industry leaders, and clapped as the president of Kenya gave a speech to open the Summit. 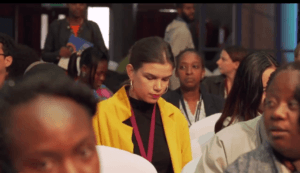 I wondered if the leaders ever consider how it feels for the youth when the same people who are making it incredibly difficult for our societies to move forward are the ones greeted on the red carpets and receiving standing ovations.

“Including” young people in conversations about the   future is not good enough anymore. We need to be heard, and our opinions need to be taken into consideration. Yes, we are the future, but we are also the present. We are not here be tokenized, and we are not here to be disregarded. We have important things to say, and we have important things to do, so let us. The sooner we all accept that, the sooner we can begin fixing the problems of today together. And only then can we talk about tomorrow.