Why we (still) need feminism

I often find myself in conversations about why feminism is still needed today, especially why it is needed in our so-called Western world. I get told from friends that they know many women with good positions at work and they basically enjoy the same rights as men do. They say that there are many problems related to gender equality and women´s rights in other regions but that here today, we are actually doing well and have, in a sense, achieved gender equality.

The problem today is that there is “the illusion of gender equality” and it is something very present especially among middle-class western young people. The feminist revolution was an “unfinished revolution” and while much has been achieved, much still remains to be done. The issue is that what remains to be done is still hidden behind the structure of our society. A lot of the oppression that women experience on a daily basis is systemized and institutionalized. Sexism and patriarchal attitudes are deeply rooted into the way society functions and into the power relations and is therefore less obvious, less visible. Ingrained sexist attitudes are not something tangible or something that can be agreed on by everyone because of how clear the inequality is (such as denying women the right to vote, or a woman not getting a job because of her chance of getting pregnant). That makes the current oppression of women in our society easily overlooked, easily forgotten under the illusion that we have achieved gender equality in our Western world at last.

This occurs because certain offensive and/or degrading behaviour towards women has become so normalized in our society that it is not considered as such anymore. It is sometimes not even consciously noticed. This behaviour has become a socially ingrained norm, which needs to be reversed. The recent #MeToo movement and the breadth of it, with stories from women of different ages, races, orientations and religions, has brought to light the extent to which sexual harassment and abuse happens and the variety of forms misogyny can take. In doing so, it has helped some people realize and become more aware of the impact that such normalized offensive behaviour actually has on women. The movement has also made it “easier to believe that the problem goes beyond individuals and instead relates to wider cultural forces” (Donegan, The Guardian, 2018).

Many statistics are revealing the extent of the sexual harassment and sexual abuse. For instance, according to a recent survey on sexism in public space conducted from January to March 2017 in Belgium by the organisation, Vie Féminine, of the 400 women questioned, 98% had previously suffered assault in their lives. 41% had suffered verbal aggression, 26% physical aggression, 21% non-verbal aggression and 12% other types of aggression, all in the public space. Those women reported feeling humiliated, angry, weakened or stressed after it happened. Although a law has been in place in Belgium forbidding such sexist behaviour since 2014, only around 3% of women use it to formally lodge a complaint. A majority of them would talk about such incidents to loved ones and while most of the time they do feel listened to and taken seriously, they also reported having had friends or relatives trivializing their experiences many times.

This survey shows the magnitude of sexualized violence experienced by women daily, as soon as they step outside of their doors. Yet, and most importantly, sexism in public spaces is only the tip of the iceberg of the continuum of violence that women experience in general, violence that often also happens in the private sphere.

However, there is actually not much need for statistics to know and become aware of the oppression women experience on a daily basis. It is enough to simply ask around since every woman has at least one story. Examples stem from being stroked “subtlety” but clearly inappropriately by an uncle at the age of 12 to being catcalled on the streets from the age of 15 on, or touched by a stranger in a metro carriage full of people, making it difficult to even spot the offender. Later, it can go from a boss saying how he is dying to put his hand on your butt and give you a kiss, to walking home alone, vividly aware of how likely it is to receive comments, whistles or worse, and ending up being followed by someone on the way, to enjoying the sun in the park only to turn around to discover a guy is watching you while openly pleasuring himself. And these are only the most recurrent and “harmless” (as will be expanded on later, I do not agree with this qualification, but that is how it is often perceived and dismissed) examples, so to say.

There is an unending list of cases of “more serious” sexual harassment or sexual assault that can leave the woman even more damaged, paralysed and hurt. The #MeToo movement has brought forward thousands of those and I won´t list them all here. Every woman has countless examples and usually, it is extremely difficult to gauge how to react or what to say. It feels shameful and shocking every single time but reacting could lead to an even worse outcome, so often it feels better to stay silent than to defend yourself. We have all learned to put up with this kind of behaviour and keep going with our day as if nothing ever happened. We often do not even consciously realize the gravity of such incidents anymore or feel sad or angry for too long. As said earlier, such degrading behaviour has become so normalized in our society that it is not considered an anomaly or something that simply should not happen. And if we do decide to mention it at all, it is often dismissed by people as a simple joke or an unimportant and unoffending event that should not be taken too seriously anyways. It very rarely even crosses our minds to do anything about it and report it to the police, for instance. The process would be too long and often fruitless because of how difficult it would be to “prove” anything or how often the fault would be put back on the victim. “You gave the wrong signals, you shouldn’t have been there at that time, you should have been dressed differently, you have been stupid, you just should have been more careful”.

The point is that such incidents of sexualized violence cannot be tolerated anymore and should definitely not be overlooked. By overlooking them, we find ourselves in what I mentioned earlier as the illusion of gender equality. Moreover, different forms of sexual harassment and sexual assault should not be placed on a hierarchical scale, but rather on a continuum (such as in the pyramid below). What is situated at the bottom of the pyramid and what has been previously given as examples (catcalling, unwanted touch, victim blaming, following, etc.) is not less important than other forms of violence. It is that which is normalized and institutionalized in our society that provides the ground for, and leads to worse forms of sexual harassment and sexual assault such as coercion, threats and rape. 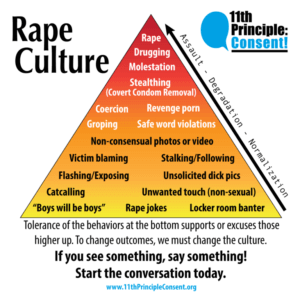 I am confident that if we collectively seek to end that normalized behavior (at the base of the pyramid) that some consider to be “not so serious”, everything else will also slowly change and end. This will have to be done through awareness raising, education and professional training programs, among other things.

So, in conclusion, yes, we still need feminism in our western society. Much has been achieved and women today enjoy many more rights than they did only a few decades ago, but so much still remains to be done. While I agree that there are very important issues and severe violations of women´s rights happening in many different places around the world, and this should of course not be forgotten or diminished, I also think that it is no reason to look away at our own problems and own ingrained sexism. As expressed throughout this article, it might be much more difficult to fight against the illusion of gender equality than against straight-forward inequality and we need to deal with that as a society. And I believe that the #MeToo movement has already started to dispel the illusion.

Call it the “too” of #MeToo: the understanding that meaningful liberation from misogyny will only be achieved collectively, with changes at the structural, cultural and institutional levels. Social feminism does not aspire to enable a few women to gain positions of power in patriarchal systems. It’s not about giving women “a seat at the table”. It’s about taking the table apart, so that we can build a new one together. (Donegan, The Guardian, 2018).

Photo by Mihai Surdu on Unsplash

Donegan, Moira. “How #MeToo Revealed the Central Rift within Feminism Today.” The Guardian, 11 May 2018, www.theguardian.com/news/2018/may/11/how-metoo-revealed-the-central-rift-within-feminism-social-individualist?utm_source=esp&utm_medium=Email&utm_campaign=The%2BLong%2BRead%2B-%2BCollections%2B2017&utm_term=274583&subid=25642316&CMP=longread_collection.