On 29 November 2020, International Women Human Rights Defender’s Day, the Civil Society Strengthening Platform (CSSP) project partners and WAVE Youth Ambassadors from Albania, Bosnia and Herzegovina, Montenegro and Serbia got together for a second time to fortify the collaborative efforts from their first action and put an emphasis on the need for intergenerational collaboration.

The goal of the CSSP is to strengthen women’s voices and agency, including that of women’s organisations working with and representing women from disadvantaged marginalized groups, at a regional level. The collaboration started in 2017, with the expected outcome to strengthen capacities of women’s organisations’ platform and/or networks as a vehicle to support women’s civic engagement in CEDAW and the Council of Europe Convention on preventing and combating VAW and DV, Istanbul Convention. The platform’s focus in 2020-2021 is on the issue of sexual violence and the support services that exist/or still have to be created in the seven partner countries: Albania, Bosnia and Herzegovina, Kosovo, Montenegro, North Macedonia, Serbia and Turkey.

For the past two years, the WAVE Youth Ambassadors have been encouraging youth inclusion in promoting non-violence, have been strategically and effectively sensitizing youth on current issues regarding violence against women and girls, and have been developing actions that facilitate positive change. We aim to continuously find synergies between WAVE projects and the ambassadors. Therefore, a link between the current generation of WAVE Youth Ambassadors and CSSP project partners appeared to be useful in further raising awareness on and contributing to the destigmatisation of sexualized violence in the Western Balkans and Turkey.

For this collaboration, the WAVE Youth Ambassadors explored the motives, driving forces and efforts of CSSP project partners in tackling sexual violence and defending women’s rights.

Their journey in fighting for women’s rights is based on various reasons and is endlessly diverse. For a partner from Kosovo, her journey is the commitment to her daughter; aiming to create a better future for her gives her infinite strength.

“My human rights work is a commitment to my daughter. I need to pass on a better place to her. She gives me strength to keep going.”

The CSSP partner from Serbia was taught already at home to always protect and support other people who are less fortunate, to empathize and act in solidarity to develop a better community. As a result of that, she became a member of the feminist and anti-militarist Women in Black movement. In the Women in Black movement, she found another home to share the same values with, but also learned that there are many other women and men, who have similar visions and dreams, and are ready to act towards positive change. There are many more motives behind their efforts, but all of them share the same values of justice, equity, respect, caring and the need to create a better place for everyone.

“As a child, I was taught in my family, as well as in school that it is a basic characteristic of humanity to support and protect other people who are less fortunate than ourselves, to feel and act in solidarity with others and to try to develop a better community. This is how I recall acting as a child, so joining the feminist and anti-militarist movement, Women in Black at that time, was as finding another home to share the same values with, but also to learn that there are many other women and men in our country, but also globally who share the same values and are ready to act towards positive change.”

Countries such as Albania, Kosovo, Turkey, Bosnia and Herzegovina and Serbia are in a need of services specifically supporting victims of sexual violence. It is another reason why their work is so valuable. For example, in Albania, CSSP partners from AWEN, have to fight against under-reporting, stigma and silence. As a result, this ‘silence’ from the victims themselves and the surrounding community has also been reflected in the institutional response to sexual violence.

“Sexual violence is the most silent kind of violence in our country, though it is very widespread in all of its forms. It happens everywhere while it remains under-reported, mainly due to the immense stigma and the shame associated to this form of violence against girls and women and not only. This ‘silence’ from the victims themselves and the surrounding community has also been reflected in the institutional response to sexual violence, which has been lacking, slow, insufficient and under budgeted. In the last 2-3 years things are slowly changing for the better, but much more needs to be done at all levels: prevention, protection and re/integration. “

Partners from Turkey are confronted with similar issues to their Albanian counterparts. In Turkey, most women who have experienced sexual violence do not share this with others, because of concerns that they will not be believed, that they will be blamed, that nothing will change; and thus, they do not report to any institution after they experience the violence. Women who report to an institution are faced with judgmental and accusatory behaviours, and they may withdraw from reporting, as  processes seem to be, almost at every stage, in favour of the perpetrators. Sexual violence is experienced by many women from all over the world and it is essential to have specialist services that will protect and support women who are experiencing trauma, abuse and violence.

“For this reason, we need a support system designed with a holistic perspective from the first step for women who are subjected to sexual violence, where each woman can access empowering support according to her needs.”

Partners from Montenegro are painting a similar picture and are highlighting that sexual violence is not only a personal problem, but also a community problem. Specialist support services aim to build a bridge between the survivor of violence and the institution that provides additional support, such as police or court. However, for this to effectively happen, women and girls affected by violence need to realize that there is no shame in reporting the violence they are enduring.

„Although sexual violence is prevalent in Montenegro, victims are usually ashamed to report this form of violence, for a number of reasons. They often do not know what their rights, so there is a need for services that will inform them about it, and indicate how they can get help to overcome trauma, how the procedure is going, what are their rights and opportunities, what types of help and support are available to them. In addition, victims often fear that institutions will not respond adequately, often resulting in non-reporting of violence. In order for the victim to be treated properly and protected from further violence, services are an important bond between the victim and the police, the prosecution, the court, health and other institutions involved in the case.“

Furthermore, the Montenegrian partners state that the normalization of harmful gender norms allows for violence of any kind to be perpetuated. Unfortunately, many people still justify, and often deny, the presence of sexual violence, particulalrly in the context of partnership and marriage. Therefore, it is crucial to change minds and positively influence the general public in recognizing sexual violence.

Although specialist services are working as much as possible to eliminate violence against women and girls, there is still a long road ahead of us. CSSP project partner from Albania Woman to Woman suggests building a register of sexual offenders and making it accessible to everyone, so that every girl, woman or parent knows who the sexual abuser is near them.

“We can still do much more:

Talking more about sexual violence, it is crucial to continuously raise awareness and share messages that reiterate that the victim is not guilty and should not be blamed nor ashamed of what happened to her. Another partner from Albania GADC reiterates the need to prepare strong laws, protective structures and rehabilitation programs as well as the importance of creating continuous prevention and awareness programs. Sexual violence is a topic not talked about a lot. Governments usually do not prioritize the tackling of sexual violence. Therefore, CSSP project partners agreed that sexual violence should be discussed, women’s specialist services should be supported, and victims should be believed. Moreover, the whole society should support victims and be aware of sexual violence. In the words of the Bosnian CSSP partner:

“Only together we can take steps forward to stop sexual violence. I don’t know if we can stop completely violence?! But I do know that we have to do everything to prevent violence as much as we can. Also, when violence happens, we need to join our strengths to create a system of support and protection for the victims. We should constantly monitor and advocate for the system to prosecute these forms of violence adequately, as well.” 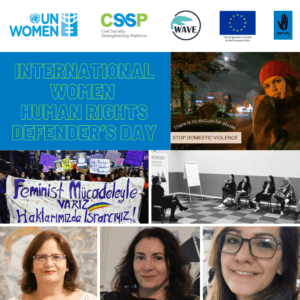 Thanks to our CSSP project partners for their relentless efforts to tackle sexual violence, for making time to answer the WAVE Youth Ambassadors questions and thus building upon the connection for the greater cause of ending sexual and gender based violence Together we can create a better, more attentive, supportive and peaceful world for everyone!