THE POWER OF YOUTH: Mia Bradić

Mia Bradić is the 2nd generation WAVE Youth Ambassador from Croatia and decided to have a conversation with activist Nataša Vajagić for the series THE POWER OF YOUTH. The message behind the powerful interview is evident: Even the smallest action has its echo!

Nataša Vajagić is a member of the Center for citizen’s initiatives in Poreč, Croatia and the person behind Our daily sexism Facebook and Instagram page. In this interview, she talks about sexism in the media, the effect it has to the fight for a gender equal world and gives advice to young activists who are just starting out.

When and where did you start your activism journey?

I started as an activist in CGI (Centre for citizen’s initiatives in Poreč) eight years ago. My areas of activism are women’s rights and LGBT rights.

The Facebook profile was started after the team of volunteers from Libela conducted a research about sexism in some of the most read news portals in Croatia: 24 Sata, Jutarnji list, Večernji list, Dnevnik and Index. Solely in January of 2017, we analyzed 9515 articles, from which 427 were sexist, meaning the results showed that 4.5% of all articles on the most read new portals in Croatia contain sexism in their headlines or subheadings. On average, only 18% of articles mention women in their headlines, which again confirms that women are underrepresented, not only in the media, but also in politics and public life in general. We chose media as a witness of extremely patriarchal society that we live in, because media is the reflection of society and the daily life, but is also the cocreator of that reality and very responsible for reproducing negative stereotypes about women and reinforcing gender roles.

During the research, we realized we could inform the public about sexism by sharing examples of sexism in the media, especially because they are usually very recognizable. As the site grew, it became clear to us that people often times don’t see sexism; it’s so deeply rooted that they don’t recognize it, because they are used to it and don’t see it as something that contributes to inequality between men and women.

I was in the team of volunteers from Libela and since I was working as a program coordinator for women’s and LGBT rights in the Centre for citizen’s initiatives, it was decided that CGI takes over the page, so we could give it more attention. CGI took over, because we also focus on the problematics of sexism, reproductive rights, violence against women, preventive programs regarding gender-based violence etc. Sometime later, we opened the Instagram page.

Which one of the sexism examples was especially memorable to you?

There are a lot of examples, but I would point out commercial campaigns which were removed after our reaction. We reported around ten of them to the Ombudswoman for gender equality and she requested for those commercial campaigns, media content and products to be removed. In that way, the commercial campaign under the slogan “…because every beauty deserves her beast” from the Electrolux company was removed in 2016. It was a commercial about a vacuum-cleaner and the company had to completely shut the campaign down. 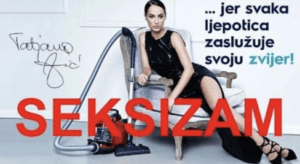 Figure 1“…because every beauty deserves her beast” – Electrolux commercial from 2016. with a word sexism over it

In 2017, the Ombudswoman sent a warning and a recommendation to Croatian Telekom for the media campaign of BobBon for Deezer in which you can hear: “Play some wicked music while you prepare your bikini body and you’ll feel like having the longest legs in the world that make all the construction workers, hot construction workers, whistle.” It was promoting harassment of women as socially acceptable.

In 2018, the reports were sent to companies KFC, Ledo and Eurobot. The KFC commercial, which said “Whether it’s the mother, wife or girlfriend, surprise her with a basket of crispy chicken, so she can get her day without cooking”, was removed, because it promoted gender stereotypes. The Ledo company posted on their social networks a video in which they share advice for single women: “I don’t think men are always right, I mean, they usually are, but here is some advice on how to get out of the single’s club. Be accessible and open. Us men sometimes say stupid things, but that’s all from the nerves. Give us another chance. Positive attitude. Smile and be patient. Yes, yes, patient. I know it’s not easy with us, but you can’t have it all here and now.” This was an ice-cream commercial and it was removed for the gender stereotypes it used. The Ombudswoman also reacted to a skit shown during the world football championship on national television where one of the characters said: “Hit women where they are the weakest and they are weak for dudes, money, cars and jackets. That’s why you should hit her on the big mouth, so she bounces back from the parking lot to a shop window. But avoid those encounters. Russian, Ukrainian and even Swedish female fans can be very much hospitable, ha ha. This is a men’s sport in which, if women aren’t cheerleaders, they have nothing to look for, not on the field nor around it.” For the promotion of gender-based violence HRT apologized and decided not to show the content anymore.  Media attention was also gathered when Our daily sexism reacted to a product called “Hitter for sexual education of women”. The purpose of the product is to hit a woman if she refuses sexual intercourse. The company’s owner thinks the product is humoristic and didn’t see anything disputable in the product. The Ombudswoman sent the company Camellia a warning and the product was withdrawn from the market. 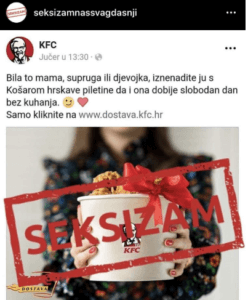 Figure 2“Whether it’s mother, wife or girlfriend, surprise her with a basket of crispy chicken, so she can get her day without cooking” – KFC commercial from 2018. promoting gender-based stereotypes

Did you encounter sexism in your own daily life?

Of course, I have never met a woman who didn’t experience some form of sexism. The problem is that sexism is so widely spread in all segments of our life that we don’t notice it, but when we become aware of it, then even the most hidden form of it is easily recognizable. That’s why one of the goals of Our daily sexism is to educate, so sexism would become something unacceptable to society. This is the third year of actively working on it and we can see a change. More and more people react to sexism, they send us examples daily and report it to the authorities.

How did the page Our daily sexism and running it affected you?

Often times activism leads to burnout, especially when you can’t see the result after all of the effort. Our daily sexism is a tool which shows really measurable results – from removed commercials, fixed articles, warnings towards journalists, editorials, apologies and what is probably the most important – putting this topic into the public space. The number of our supporters grows daily and with that our impact as well. Through the upcoming projects, we want to educate the media, which are the main creators of public opinions, to stop reporting in a sexist way and to condemn sexism as unacceptable. That should be another step towards equality of women in the society.

What is, in your opinion, the biggest obstacle to reaching gender equality in Croatia?

Any talk about human rights feels very personal to people, because it’s connected to deeply ingrained personal opinions, learned patterns and, in some cases, privileged roles which are hard to discard, and, because of that, opinions and attitudes towards something are hard to change. Women are raised to accept sexism, consider it normal and not react to it. For example, unwanted touching in a working place will usually cause a reaction similar to “well, that’s just the way he is, he doesn’t mean anything bad” or “I’m afraid to say anything so I don’t get fired”. If in a commercial a woman is shown as a sexual object, comments like “it’s her fault” can often be heard. Those commercials support damaging stereotypes. Women are accused of provoking and are blamed and victimized, if they experience violence. In this way, the focus is moved from the abuse and the abuser to victim-blaming. This behavioral pattern is encouraged with inappropriate media coverage of femicides, especially cases where a woman is murdered by her (ex) partner.  We will usually read in the media that “the neighbors are in shock”, “he always seemed nice”, “no one could even doubt he was beating her” and that “she probably had a lover and he couldn’t take it anymore, so he shot her”.  That is, in fact, the problem of sexism, it often isn’t obvious, and it’s rooted so much in our society that we don’t recognize it or criticize it, in fact, we perpetuate it.

One of the examples are articles about clothes and “looks” female parliament representatives are wearing that often occur on news portals, but you don’t see the same trend for male representatives. Why? Realistically, it isn’t important, and it has nothing to do with their job. So why is the color of the dress of a female parliament representative talked so much about? Because women are objectified, and in the media, the reports about women are saying more about their looks than their accomplishments.

Sexism is easy to notice in reports about female athletes. We oftentimes witness articles that describe in detail women photographed on beaches and in the streets; those articles send a message that everyone in any moment has the right to a female body. 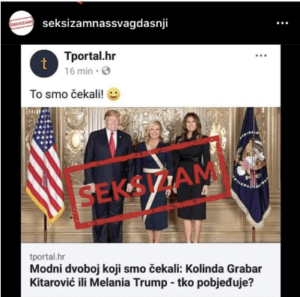 Figure 3″The fashion duel we were waiting for: Kolinda Grabar Kitarović or Melania Trump – who wins?” – Our daily sexism pointing out the focus on “looks” in the news portal Tportal when it comes to meeting of at the time Croatian president with the first lady of the USA.

Patriarchy isn’t supported only by men, but also by women. Those are all learned behavioral patterns. One could say that sexism is a part of our tradition. To answer your question, the biggest obstacle in accomplishing gender equality is not one, but all of those mentioned and more, and all are equally important. Even though I believe it’s important to work in all fields, when it comes to sexism, it’s really important to react even to a smallest example of it, because that’s just a drop in the sea of inequality.

Did you ever want to quit? And if you did, what changed your mind?

When you’re not fighting for women’s right, you are also active when it comes to rights of the LGBTQIA+ community. How do these two areas intertwine?

Both fields talk about inequality and demand equal possibilities and rights for everybody. Those are overlapping fights. I wish for times to come that we fight with education, not with reaction. Only with education we can create generations of people that will advocate for equality, always.

What’s your message for young people who want to become activists for gender equality?

Go for it, every, even the smallest, action has its echo and every move is important. Go on a protest, organize one, write a letter to the local government, share a post on social media, write a blog, create exhibitions, film movies, report sexist article to the authorities ;)… all of this can be a form of activism that will help make a step towards equality.